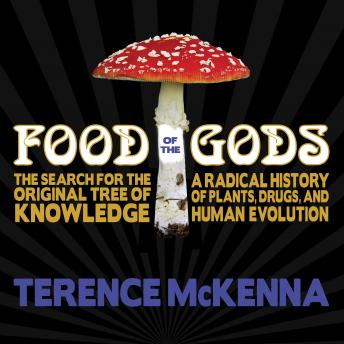 Food of the Gods: The Search for the Original Tree of Knowledge: A Radical History of Plants, Drugs, and Human Evolution

Terence McKenna hypothesizes that as the North African jungles receded, giving way to savannas and grasslands near the end of the most recent ice age, a branch of our arboreal primate ancestors left the forest canopy and began living in the open areas beyond. There they experimented with new varieties of foods as they adapted, physically and mentally, to the environment. Among the new foods found in this environment were psilocybin-containing mushrooms growing near dung of ungulate herds occupying the savannas and grasslands. Referencing the research of Roland L. Fisher, McKenna claims the enhancement of visual acuity was an effect of psilocybin at low doses and suggests this would confer adaptive advantage. He argues that the effects of slightly larger doses, including sexual arousal, and in larger doses, ecstatic hallucinations & glossolalia-gave selective evolutionary advantages to members of those tribes who partook of it. There were many changes caused by the introduction of this psychoactive to primate diets. He hypothesizes, for instance, that synesthesia (the blurring of sensory boundaries) caused by psilocybin led to the development of spoken language: the ability to form pictures in another person's mind through the use of vocal sounds. About 12,000 years ago, further climate changes removed psilocybin-containing mushrooms from human diets. He argues that this event resulted in a new set of profound changes in our species as we reverted to the previous brutal primate social structures that had been modified and/or repressed by frequent consumption of psilocybin.

This title is due for release on September 28, 2012
We'll send you an email as soon as it is available!