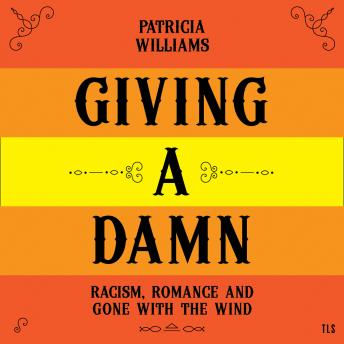 The Giving A Damn: Racism, Romance and Gone with the Wind

‘I cannot help but see the bodies of my near ancestors in the current caravans of desperate souls fleeing from place to place, chased by famine, war and toxins. Ideas honed in slavery – of the otherness, the boorishness, the inferiority of thy neighbour – have continued to travel through American society.’


The story of slavery in America is not over. It lives on in how we speak to one another, in how we treat one another, in how our societies are organised. In Giving a Damn, the legal scholar Patricia Williams finds that when you begin to unpick current debates around immigration, freedom of speech, the culture wars and wall-building, beneath them lies the unexamined history of enslavement in the West. Our ability to dehumanize one another can be traced all the way from the plantation to the US President’s Twitter account.


Williams begins in the American South with Gone With the Wind (still the second most popular book in the USA after the Bible), that nostalgic tale full of the myths of the Southern belle, Southern culture, ‘good food and good manners’. The scene is seductive, from a distance. How nice it is to paper over the obliging slavery at the novel’s core, and enjoy the wisteria-covered plantations, now the venue for weddings.


But Williams’s maternal great-grandmother was a slave, her great-grandfather a slave-owner, and papering over has left us in a world that has never been more segregated, incarcerated or separated from each other. Williams wants to know which ideas brought the richest and most diverse nation on the planet to the brink of resurgent, violent division and what this means for the rest of the world. And she finds that most of those ideas began in slavery.