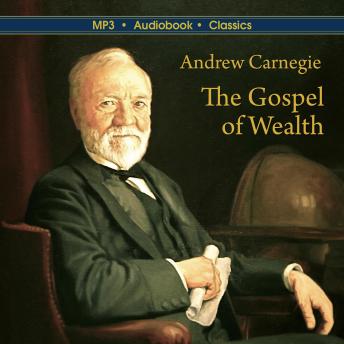 The Gospel of Wealth

Andrew Carnegie, an immigrant from Dunfermline, Scotland with only a grammar-school education, amassed a fortune in the steel industry the 1800’s to become the richest American in history. Yet Carnegie believed strongly that the wealthy should live modestly, without ostentation, and devote their energies after achieving wealth to finding ways to invest their “surplus wealth” in ways that benefit the public. Historically, private fortunes were handed down to heirs, with bequests to the state for public purposes as well. Carnegie observed that fortunes were often squandered in self-indulgent extravagance and irresponsible spending and felt such funds would be better put to use to help the poor help themselves and reduce the stratification of the classes. He favored a system of progressive inheritance taxes to help facilitate this distribution, but also felt the best results would be achieved when those that had made the fortunes turned their attention to investing their capital in charitable enterprises that they controlled and even managed. He initially published his controversial ideas in the North American Review 1880 in an article entitled “Wealth”. It was later re-titled “The Gospel of Wealth” and published in the Pall Mall Gazette in 1889. It has become the foundation document that sets forth much of the thinking behind philanthropy since his time. It has been called the ‘urtext’ of modern philanthropy by Benjamin Soskis, a historian of philanthropy. The article appears here in two versions. The first is a new reading by D. S. Harvey and the second is recording of Carnegie himself.