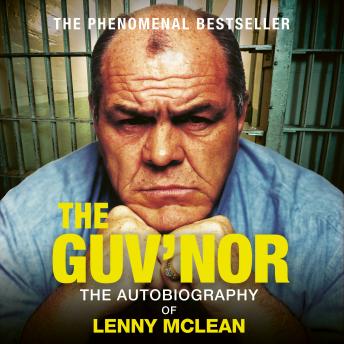 The Guv'nor: The Autobiography of Lenny McLean

THIS IS THE CLASSIC BOOK THAT STARTED AN ENTIRE GENRE - THE STORY OF THE MOST ICONIC HARDMAN OF THEM ALL.

Lenny McLean was one of the deadliest bareknuckle fighters Britain has ever seen. He had dear, powerful friends, but he also had terrible enemies. So much so that he had two bullet wounds in his back - each from a different attack. He was also stabbed repeatedly - always from behind. But Lenny was also a warm, big-hearted grizzly bear of a man, whose main weakness was an overwhelming desire to put the welfare of his mates ahead of his own well-being.

In his extraordinary autobiography, he tells of how the mafia flew him to New York to take on their greatest bareknuckle boxer in a multi-million pound illicit bout. The Mafia's man lasted less than three minutes. When the IRA fronted up a London gang in a money-laundering scam, Lenny was brought in to intimidate the terrorists. The IRA, not surprisingly, backed off. . .

His most serious trial came when he was accused of murder. Fighting to prove his innocence against a minimum sentence of twenty-five years, Lenny never gave up - and went on to be found not guilty.

This is a tale of one man's triumph against almost insurmountable odds, in a battle that Len fought every day for himself, and to 'put steam on the table' for his wife and kids.

Great book for those interested in the British crime world, and the "Hard Men" that ran it!!!! Excellent narration also. Gave the story a really authentic reading. Great book. "10 out of 10!!!", to quote Lenny!!!!

This title is due for release on December 22, 2020
We'll send you an email as soon as it is available!