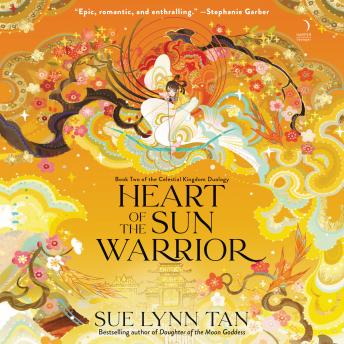 Heart of the Sun Warrior: A Novel

The stunning sequel to Daughter of the Moon Goddess delves deeper into beloved Chinese mythology, concluding the epic story of Xingyin—the daughter of Chang’e and the mortal archer, Houyi—as she battles a grave new threat to the realm, in this powerful tale of love, sacrifice, and hope.

After winning her mother’s freedom from the Celestial Emperor, Xingyin thrives in the enchanting tranquility of her home. But her fragile peace is threatened by the discovery of a strange magic on the moon and the unsettling changes in the Celestial Kingdom as the emperor tightens his grip on power. While Xingyin is determined to keep clear of the rising danger, the discovery of a shocking truth spurs her into a perilous confrontation.

Forced to flee her home once more, Xingyin and her companions venture to unexplored lands of the Immortal Realm, encountering legendary creatures and shrewd monarchs, beloved friends and bitter adversaries. With alliances shifting quicker than the tides, Xingyin has to overcome past grudges and enmities to forge a new path forward, seeking aid where she never imagined she would. As an unspeakable terror sweeps across the realm, Xingyin must uncover the truth of her heart and claw her way through devastation—to rise against this evil before it destroys everything she holds dear, and the worlds she has grown to love . . . even if doing so demands the greatest price of all.

This title is due for release on November 15, 2022
We'll send you an email as soon as it is available!