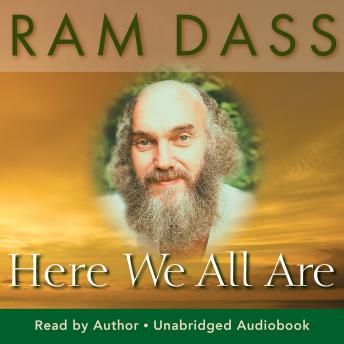 Here We All Are

Telling his story in 'three chapters,' Ram Dass explains how he moved from the structured academic world to wide-open experiences with psychedelics (and the Harvard experiments with Timothy Leary). Then in India, he met his guru, Neem Karoli Baba (Maharaji), who taught him to 'just be here now.'
Ram Dass shares with us how we can all attain a state of well-being. The result is that we'll become more centered, and we'll learn to see the God in each other, which ultimately leads to an overwhelming sense of oneness with, and love for, our fellow humans.
As Neem Karoli Baba says, 'The same blood runs through all our veins.'
He recorded Here We All Are, which reflects the transformation of Dr. Richard Alpert to Ram Dass, in 1969.
Bonus-Be Here Now music included in this download: This download features music from Ram Dass lectures from 1968 to 1970. It was one of the first recordings of its kind to introduce the concepts of Kirtan (chanting) to this country. It also has some of the most important mantras from the Vedic tradition of India.

This title is due for release on March 7, 2006
We'll send you an email as soon as it is available!