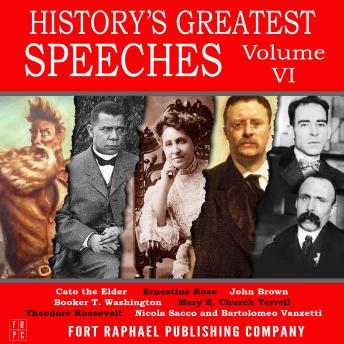 The most profound and important speeches ever delivered are here collected in this anthology, featuring some of the most influential figures in world history.

From ancient times to the American Revolution to as recently as this past century, Fort Raphael Publishing has collected some of the most important and iconic speeches of all time and recorded them for this series.

This is a SoundCraft Audiobooks production and the speeches are presented in an immersive audio style, allowing the listener to experience what it must have been like to be present when these speeches were first delivered.

Volume VI features such disparate historical characters as Cato the Elder (Joe D. Lauck) opposing the repeal of the oppressive Oppian Law, Ernestine Rose (Linda Kimbrough), an early pioneer for women’s rights, abolitionist John Brown’s (Robert Koon) fiery speech at the conclusion of his trial for treason, Booker T. Washington (Will Chris) speaking of the struggle of Black Americans to make economic and social advancements, Mary E. Church Terrell (Casaundra Freeman) on the challenges of living as a Black woman in the nation’s Capitol, Theodore Roosevelt’s (Ted Koch) astonishing speech from a 1912 campaign stop, which he delivered moments after being shot by an assassin and the closing remarks from the Defendants in the Sacco and Vanzetti murder trials (Christopher Tiffany and Paul Stroili, with Lawrence Theis as the judge).

This collection of powerful and moving speeches pays tribute to these great orators and to the words they used to inspire millions.

This is the sixth volume of this series.

This title is due for release on June 7, 2021
We'll send you an email as soon as it is available!