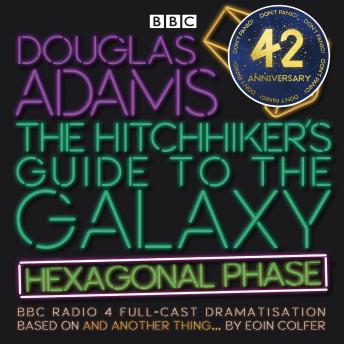 The Hitchhiker’s Guide to the Galaxy: Hexagonal Phase: And Another Thing...

The brand new BBC Radio 4 full-cast series based on And Another Thing… the sixth book in the famous Hitchhiker’s Guide “trilogy”.

Winner of the 2019 Audie Award for Science Fiction.

Forty years on from the first ever radio series of The Hitchhiker’s Guide to the Galaxy, Arthur Dent and friends return in six brand new episodes, in which they are thrown back into the Whole General Mish Mash in a rattling adventure involving Viking Gods and Irish Confidence Tricksters, with our first glimpse of Eccentrica Gallumbits and a brief but memorable moment with The Ravenous Bugblatter Beast Of Traal.

First broadcast on BBC Radio 4 in 2018, the series is written and directed by Dirk Maggs and based on And Another Thing… by Eoin Colfer with additional unpublished material by Douglas Adams. This edition also includes over 50 minutes of unbroadcast bonus material.

Listeners are reminded that the relaxed attitude to danger provided by Joo Janta 200 Super-Chromatic Peril Sensitive Sunglasses is no substitute for running around, screaming.

Music by Philip Pope
Production research by Kevin Jon Davies
Written and directed by Dirk Maggs
Based on the novel And Another Thing… by Eoin Colfer, with additional material by Douglas Adams
Recorded at The Soundhouse Ltd. by Gerry O'Riordan
Sound Design by Dirk Maggs
Produced by Dirk Maggs, Helen Chattwell and David Morley
A Perfectly Normal Production for BBC Radio 4

Wonderful, this is enjoy for the ears

This title is due for release on April 13, 2018
We'll send you an email as soon as it is available!