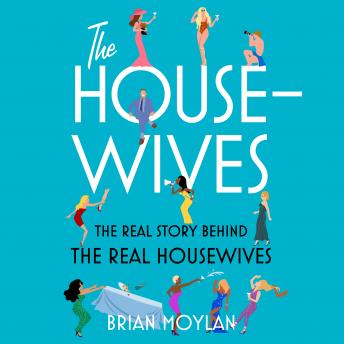 The Housewives: The Real Story Behind the Real Housewives

In the spring of 2006, a new kind of show premiered on Bravo: The Real Housewives of Orange County. Its stars were tanned, taut, and bedazzled; their homes were echoey California villas; and their drama was gossip-fueled, wine-drenched, and absolutely exquisite. Fifteen seasons on, RHOC is an institution, along with The Real Housewives of New York, Atlanta, New Jersey, Miami, Potomac, and more. Over the years these ladies have done a lot more than lunch, launching thirty-one books, a cocktail line, two jail sentences, a couple supermodel daughters, Andy Cohen’s talk show career, thirty-six divorces, fourteen albums, a White House party crash, and approximately one million memes.

Brian Moylan has been there through it all, in front of the screen and behind the scenes. The writer of Vulture’s beloved series recaps, he’s here to tell us the full story, from the inside scoop on every classic throwdown to the questions we’ve always wanted to know, like—what are the housewives really like off-camera? (The same.) How much money do they make? (Lots.) He has a lot to say about the legacy and fandom of a franchise that’s near and dear to his heart, and inextricable from pop culture today.

A must-have for any fan of real drama and fake [redacted], The Housewives is the definitive companion to an American TV treasure.

'In THE HOUSEWIVES, entertainment journalist and self-proclaimed Real Housewives anthropologist Moylan provides a complete history of the franchise, which thanks to interviews both on and off the record with members of the production team as well as current and former housewives is both painstakingly thorough and incredibly juicy...In the words of former Housewife Bethenny Frankel, Moylan truly “mentions it all.” -- Booklist, starred review

This is a must for Bravo and Real Housewives lovers! Gives interesting insight into the background and inner workings of the franchises. Entertaining and interesting! Only negative is the narrator….. Sorry! It was painful and irritating to listen to him. Would have been great with a different narrator.