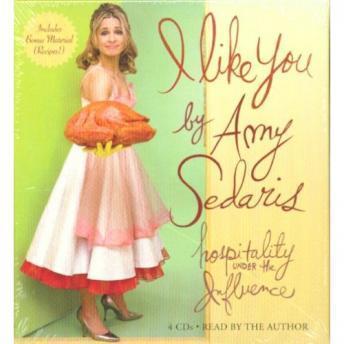 Are you lacking direction in how to whip up a swanky soiree for lumberjacks? A dinner party for white-collar workers? A festive gathering for the grieving? Don't despair.Take a cue from entertaining expert Amy Sedaris and host an unforgettable fete that will have your guests raving. No matter the style or size of the gathering -from the straightforward to the bizarre- I LIKE YOU provides jackpot recipes and solid advice laced with Amy's blisteringly funny take on entertaining, plus four-color photos and enlightening sidebars on everything it takes to pull off a party with extraordinary flair.You don't even need to be a host or hostess to benefit -Amy offers tips for guests, too! Readers will discover unique dishes to serve alcoholics (Broiled Frozen Chicken Wings with Applesauce), the secret to a successful children's party (a half-hour time limit, games included), plus an appendix chock-full of arts and crafts ideas (a mini pantihose plant-hanger), and much, much more!

This title is due for release on October 16, 2006
We'll send you an email as soon as it is available!