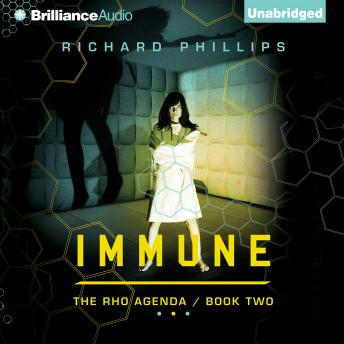 #2 of The Rho Agenda

Anyone who dares challenge the Rho Project is being systematically picked off. At the top of the hit man’s death list: NSA fixer Jack Gregory, and the three teenagers who first exposed the Rho Project’s dark agenda to the world.On the run for their lives, Heather, Mark, and Jennifer know that the Rho Project’s alien nano-technology has been released into the world, disguised as a miracle cure. But what they don’t yet know is that the serum has taken on a life of its own, modifying human DNA in a way that even its engineers cannot control—one that will alter the very fabric of humanity.

Awesome book! Part 2 in a 3 part series. Its modern but not wonder-bread.. I rate this up there with Robert Heinlein! IMHO

Storyline is terrible, and too many characters introduced immediately.

Great story, well read. Recommended, if you like engaging plot and lots of excitement. Book three due on 11/20/12, will download immediately when available.