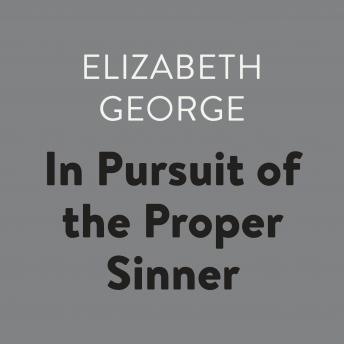 In Pursuit of the Proper Sinner

Calder Moor is a wild and deadly place: many have been trapped in the myriad limestone caves, lost in collapsed copper mines, injured on perilous gritstone ridges. But this time, when two bodies are discovered in the shadow of the ancient circle of stones known as Nine Sisters Henge, it is clearly not a case for Mountain Rescue. The corpses are those of a young man and woman. Each met death in a different fashion. Each died violently.

To Detective Inspector Thomas Lynley, brought in to investigate by special request, this grisly crime promises to be one of the toughest assignments of his career. For the unfortunate Nicola Maiden was the daughter of a former officer in an elite undercover unit, a man Lynley once regarded as a mentor. Now, as Lynley struggles to find out if Nicola's killer was an enemy of her father's or one she earned herself, a disgraced Barbara Havers, determined to redeem herself in the eyes of her longtime partner, crisscrosses London seeking information on the second murder victim.

Yet the more dark secrets Lynley and Havers uncover, the more they learn that neither the victims nor the suspects are who they appear to be. And once again they come up against the icy realization that human relationships are often murderous...and that the blood that binds can also kill.

In Pursuit of the Proper Sinner

This title is due for release on November 27, 2018
We'll send you an email as soon as it is available!