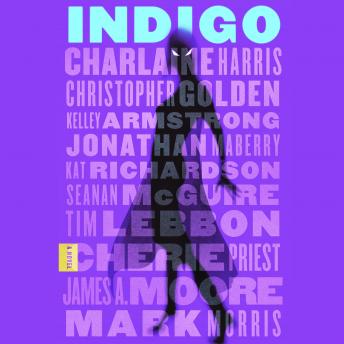 Investigative reporter Nora Hesper spends her nights cloaked in shadows. As Indigo, she's become an urban myth, a brutal vigilante who can forge darkness into weapons and travel across the city by slipping from one patch of shadow to another. Her primary focus both as Nora and as Indigo has become a murderous criminal cult called the Children of Phonos. Children are being murdered in New York, and Nora is determined to make it stop, even if that means Indigo must eliminate every member. But in the aftermath of a bloody battle, a dying cultist makes claims that cause Indigo to question her own origin and memories.
Nora's parents were killed when she was nineteen years old. She took the life insurance money and went off to explore the world, leading to her becoming a student of meditation and strange magic in a mountaintop monastery in Nepal...a history that many would realize sounds suspiciously like the origins of several comic book characters. As Nora starts to pick apart her memory, it begins to unravel. Her parents are dead, but the rest is a series of lies. Where did she get the power inside her?