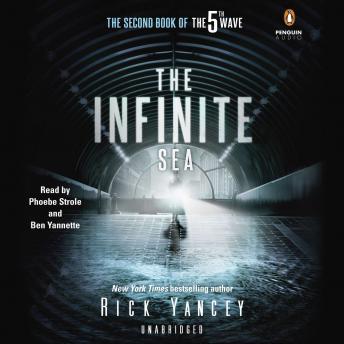 The Infinite Sea: The Second Book of the 5th Wave

The riveting follow-up to the New York Times bestselling The 5th Wave, hailed by Justin Cronin as “wildly entertaining.”

How do you rid the Earth of 7 billion humans? Rid the humans of their humanity.

Surviving the first four waves was nearly impossible. Now Cassie Sullivan finds herself in a new world, a world in which the fundamental trust that binds us together is gone. As the 5th Wave rolls across the landscape, Cassie, Ben, and Ringer are forced to confront the Others’ ultimate goal: the extermination of the human race.

Cassie and her friends haven’t seen the depths to which the Others will sink, nor have the Others seen the heights to which humanity will rise, in the ultimate battle between life and death, hope and despair, love and hate.

Well done really enjoyed it can't wait till next book.

Well worth the read!

Wonderful book, produced great and read perfectly. What more can I say?

Great book - enjoying the series! Ready to move on to book three!

This is one of the best books that I have "read".

I read the first book and watched the movie. They were both great! Now I am listening to the second book at bedtime. It helps so much. Definitely 4/5

Great follow up. Switching viewpoints really helped expand the story and gave some really good character depth. The narration was really good but not as good as it should have been in times of distress, etc. All in all a great use of a credit.

This is a great series and so easy to download and listen through this app!