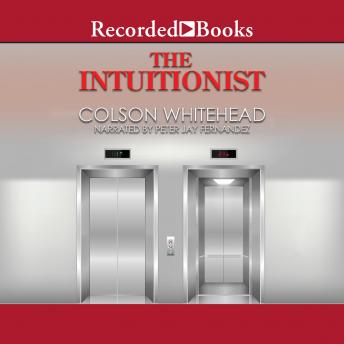 In a marvelous debut novel that has been compared to Ralph Ellison's Invisible Man and Joseph Heller's Catch-22, Colson Whitehead has created a strangely skewed world of elevators and the people who control their ups and downs. Lila Mae Watson-the first black female inspector in the world's tallest city-has the highest performance rating of anyone in the Department of Elevator Inspectors. This upsets her superiors, because Lila is an Intuitionist: she inspects elevators simply by the feelings she gets riding in them. When a brand new elevator crashes, Lila becomes caught in the conflict between her Intuitionist methods and the beliefs of the power-holding Empiricists. Her only hope for clearing her name lies in finding the plans of an eccentric elevator genius for the 'black box': a perfect elevator. A brilliant allegory for the interaction of the races, The Intuitionist is also an intriguing mystery, solidly grounded by the exceptional narration of Peter Jay Fernandez.

This title is due for release on April 25, 2008
We'll send you an email as soon as it is available!