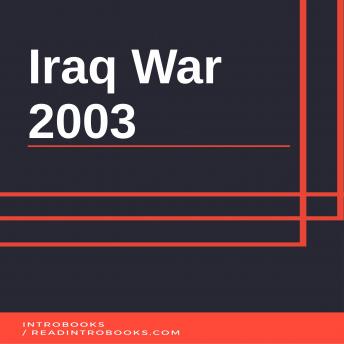 The Iraq War is the Third Gulf War that was initiated by the military invasion of Iraq by the US Troops in March 2003. The invasion was also the result of the seizure of Iraq and its major cities by the allies of the United States to bring an conclusion to the Baath Party of Saddam Hussein who was a well-known leader of the Baath party and the 5th President of Iraq. The chief cause of the Iraq War could be related to the GWOT (Global War on Terrorism) which was declared by the United States President George W. Bush in response to the terrorist attacks on the World Trade Center on 11th September 2001.


The events of the Iraq War were both brutal and severe on both the sides including the Iraqi army and the common man as well as on the US Army and its allies. It resulted in the defeat of the Iraqi Army and the exposure and the execution of the Baath party leader Saddam Hussein. The war also resulted in the mass casualty of thousands of army men along with the common men, especially children among the dead and the severely wounded. In addition to the loss of life, the war also resulted in heavy economic losses in terms of several US Million dollars at the cost of heavy armaments and missiles.

This title is due for release on May 13, 2019
We'll send you an email as soon as it is available!