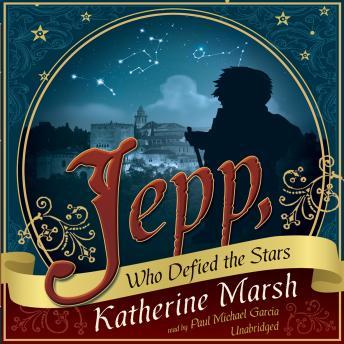 Jepp, Who Defied the Stars

Fate—is it written in the stars from the moment we are born, or is it a bendable thing that we can shape with our own hands? Jepp of Astraveld needs to know. He left his countryside home on the empty promise of a stranger, only to become a captive in the strange, luxurious prison that is Coudenberg Palace, the royal court of the Spanish infanta. Nobody warned Jepp that, as a court dwarf, daily injustices would become his seemingly unshakeable fate. If the humiliations were his alone, perhaps he could endure them, but it breaks Jepp’s heart to see his friend Lia suffer. After Jepp and Lia perform a daring escape from the palace, Jepp is imprisoned again, alone in a cage. Now, spirited across Europe by a kidnapper in a horse-drawn carriage, Jepp is unsure where his unfortunate stars may lead him. Before Jepp can become the master of his own destiny, he will need to prove himself to a brilliant and eccentric new master—a man devoted to uncovering the secrets of the stars—earn the love of a girl brave and true, and unearth the long-buried secrets of his parentage. He will find that beneath the breathtaking cruelty of the world is something else: the persistence of human kindness. Masterfully written, grippingly paced, and inspired by real historical characters, Jepp, Who Defied the Stars is an awe-inspiring story of triumph in the face of unimaginable odds.

Jepp, Who Defied the Stars

This title is due for release on October 9, 2012
We'll send you an email as soon as it is available!