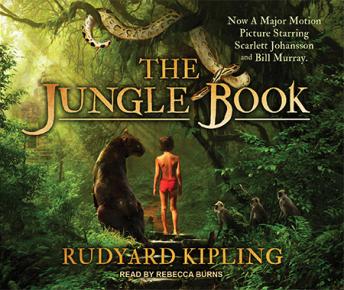 'Oh hear the call!-Good hunting all / That keep the Jungle Law!' -Night-Song in the Jungle

When young little Mowgli's parents are run out of their camp by a formidable Bengal tiger, the toddler scampers to safety alone in the cave of a Seeonee wolf pack. Thereafter, forest animals succor Mowgli, and through his wits and their kindness, he reaches adulthood.

Paradox exists in this paradise, but nowhere more forcefully than in the Bengal tiger, Shere Khan. In the contest that must occur between Shere Khan and Mowgli, which will triumph: the human intelligence of Mowgli, or the deep, instinctive cunning of the wily striped cat?

Rudyard Kipling, who was forced to learn the art of self-preservation at a foster home and boarding school, believed in following the 'Law of the Jungle.' Part silly, part serious, the delightful stories in The Jungle Book convey Kipling's message in a way that children and adults alike appreciate.

This title is due for release on October 20, 2008
We'll send you an email as soon as it is available!