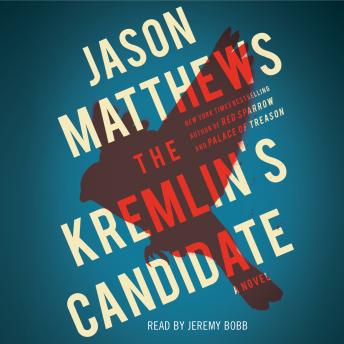 #3 of The Red Sparrow Trilogy

The “terrifically good” (The New York Times Book Review) finale in the New York Times bestselling Red Sparrow trilogy continues the dangerous entanglements of Russian counterintelligence chief Dominika Egorova and her lover, CIA agent Nate Nash, on the hunt for a Russian agent working in the US government.

Russian president Vladimir Putin is planning the covert assassination of a high-ranking US official with the intention of replacing him with a mole whom Russian intelligence has cultivated for more than fifteen years.

Catching wind of this plot, Dominika, Nate, and their CIA colleagues must unmask the traitor before he or she is able to reveal that Dominika has been spying for years on behalf of the CIA. Any leak, any misstep, will expose her as a CIA asset and result in a one-way trip to a Moscow execution cellar. Ultimately, the lines of danger converge on the spectacular billion-dollar presidential palace on the Black Sea during a power weekend with Putin’s inner circle. Does Nate sacrifice himself to save Dominika? Does Dominika forfeit herself to protect Nate? Do they go down together?

With a plot ripped from tomorrow’s headlines, The Kremlin’s Candidate is “both timely and timeless; an espionage tale that takes the reader behind and beyond the headlines of Russia’s assault on America” (Nelson DeMille).

Bad ending...after 42 hours invested in this trilogy author could have reward us with a little happiness.

Cried too good to end.

Excellent! Totally compelling trilogy but sad to see the ending.

Excellent writing but someone should have taught the reader how to speak Russian.

Great story. This trilogy got stronger, each book better than the previous installment. In this one, there are some amazing and memorable scenes, along with several hard-to-forget, but believable characters. Yes, the ending is controversial. Yes, some will complain. But this series is as realistic as they come. And that’s as it should be. Apparently, real espionage doesn’talways follow a Hollywood script.

This title is due for release on February 13, 2018
We'll send you an email as soon as it is available!