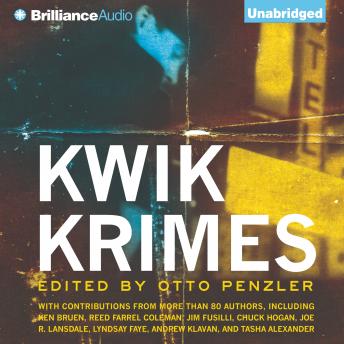 Crimes happen in a flash. Before you even know it, the shots have rung out, the jewels have been stolen, and the bodies are cooling on the floor. In this anthology, over eighty authors — including veterans such as Chuck Hogan, Ken Bruen, and Tasha Alexander — come together to tell tales of murder and mayhem, all in one thousand words or less. Dare to confront these fearful, furious tales, each offering a glimpse of the darkness lurking in the human heart: The mystifying murder of a pack rat’s wife... A mother’s terrifying attempts to save her children’s souls... The runaway consequences of a mindless act of violence... A detective who can’t resist the disturbing lure of his latest case... The cold-blooded scheming of a desperate businessman... Told with precision and punch, these stories come and go as quickly as a gunshot.

This title is due for release on December 3, 2013
We'll send you an email as soon as it is available!