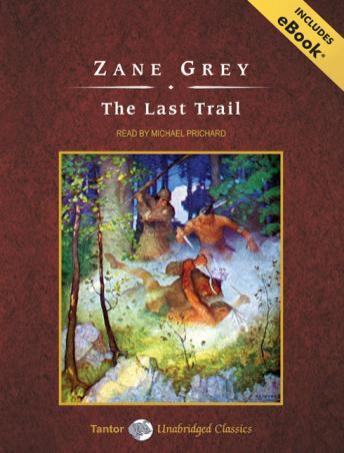 The Last Trail is the third and final novel in Zane Grey's Ohio River trilogy. In many ways, this concluding volume of the saga is one of perpetuation. The wilderness along the Ohio has been rapidly disappearing. Forests have been replaced by farms. Woodsmen, hunters, and frontiersmen are becoming farmers. This is true, in fact, for almost everyone except that strange and wonderful character, the 'mysterious, shadowy, elusive man, whom few pioneers ever saw, but of whom all knew,' Lew Wetzel.

Known by the Indians as Death Wind, Wetzel and his partner, Jonathan Zane, are hard on the trail of white rustlers led by Simon Girty and Bing Leggitt. One night at their campfire, Helen Sheppard and her father, who have become lost in the forest on their way to Fort Henry, are approached by Wetzel and Zane. For Zane and Sheppard, this accidental encounter is the beginning of a romance that will be fraught with many dangers. Betty Zane, whose dash for gunpowder in the defense of Fort Henry during the Revolutionary War is now legendary, and her brother, Colonel Ebenezer Zane, are also among the characters in The Last Trail-older now, sharing their wisdom and experiences with a younger generation.

This title is due for release on March 2, 2009
We'll send you an email as soon as it is available!