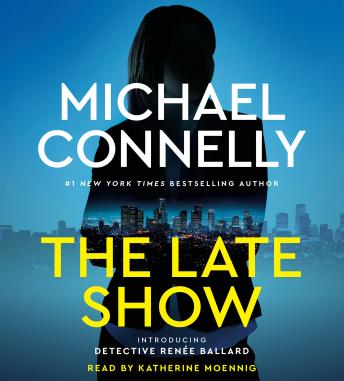 #1 New York Times bestselling author Michael Connelly introduces Renee Ballard, a fierce young detective fighting to prove herself on the LAPD's toughest beat--the Late Show.
Renee Ballard works the midnight shift in Hollywood, beginning many investigations but finishing few, as each morning she turns everything over to the daytime units. It's a frustrating job for a once up-and-coming detective, but it's no accident. She's been given this beat as punishment after filing a sexual harassment complaint against a supervisor.But one night Ballard catches two assignments she doesn't want to part with. First, a prostitute is brutally beaten and left for dead in a parking lot. All signs point to a crime of premeditation, not passion, by someone with big evil on his mind. Then she sees a young waitress breathe her last after being caught up in a nightclub shooting. Though dubbed a peripheral victim, the waitress buys Ballard a way in, and this time she is determined not to give up at dawn. Against orders and her partner's wishes, she works both cases by day while maintaining her shift by night. As the investigations intertwine, Ballard is forced to face her own demons and confront a danger she could never have imagined. To find justice for these victims who can't speak for themselves, she must put not only her career but her life on the line. Propulsive as a jolt of adrenaline and featuring a bold and defiant new heroien, The Late Show is yet more proof that Michael Connelly is 'a master of the genre' (Washington Post).

I really enjoyed this book. I recommend it highly.

Good book but very poor narration. It’s a shame what a bad narration can do to a good book. Maybe this one is worth reading rather than hearing.

Story was slow to start, but it was pretty good once it got going. Narrator was monotonous in tone— a little hard to listen to, but not enough to put it down.

Good book. Connelly continues to weave a good tale in the detective thriller. The narrator was disappointing, too quick, not much inflection at the right time, no emotion.

I enjoyed the book despite the poor narrator. She drops off her delivery at the end of every sentence. Very annoying.

The book was good, Ballard was interesting but the narration was poor. Very montone.

Michael Connelly is just a genuis, loved this new book and Reneè is my new hero !

I absolutely love he story but the narrator takes away from the story much of the emotion and suspense needed for this audio book to be great.

I've listened to every book Michael Connelly has written on audio. I enjoyed this book though I wouldn't say it is one of his best. (Connelly's best books are still those featuring Harry Bosch). But I like the new detective Renee and look forward to further books in the series. The other reviewers seem very critical of the narration, I did not think it was bad. In my view it's the words not the narration that bring the characters to life, and I prefer narration that is not too "distracting".

Even the narrator sounded bored and uninterested. I had to up the speed and still found it difficult to get through. How many "he said" "she said" was in this book? This was my first Connelly book and possibly my last.

My first and last Michael Connelly. I was intrigued by the reviews of a woman detective but after the initial setup it became too predictable.

I enjoyed the book. It took a few chapters to warm to the narrator.

The with a better narrator the book would be 4 stars but Ballard was not that likable until the end with Lola.

I am a big Michael Connelly fan, but this book does not measure up. Wish I could get a credit for the amount of money I spent to purchase it. Although the reader tries, she can't hold a candle to Titus Weliver as a reader. I am so sorry to be so blunt, but the story line and reader are equally boring.

Book was a little slow. At one point I thought it was finished but I still had 2 hrs to go. Had to work to remember what first part of book was about when it got back to that story. Didn't care for the narrator. Used to listening to book where different people have different voices but this was a straight read.

Interesting new character. Hopefully there will be other books featuring Renee Ballard.

I love Michael Connelly and I thought this was a great book. My first audio book and I found the narrator good.

Another good Connelly story, hopefully the start of another strong series. I have seen complaints about the narrator, but I thought she did an excellent job of bringing the main character to life

Couldn't get into the book. Narrator was not enjoyable

Love this character and I liked the narrator

Great book again by Connelly. Great characters, plot moves at a great pace. There's not many writers better than Connelly at procedurals. I had hoped to see Bosch appear, but did on his latest book dark sacred night.

Loved the story - hated the voice they cast!

Narrator reads too fast a lot of the time and often monotone.

a very good listen, moved along at a good pace.

This book was absolutely horrible in every sense of the word. The dialog was filled with (he said - she said) back and forth. The book felt rushed and the author replaced details from early chapters in the later chapters; like he'd forgotten what he'd written. The narration was horrendous!! I can not stress that enough. Boring as hell. She didn't breath an ounce of like into any of these charters. She lacked even the smallest emotion, It was like listing to the same tone for nine hours. Usually, I can finish a fifteen-hour book in two days if the story and narration are on point. But it took me a week to listen to this book. I really wish I'd spent my credit on something else. If you like boring, one toned, jump stories, this is the book for you. Just my two cents.

It was a good book, but the ending once again was disappointing; I do like Renee Ballard though; tough cop!!