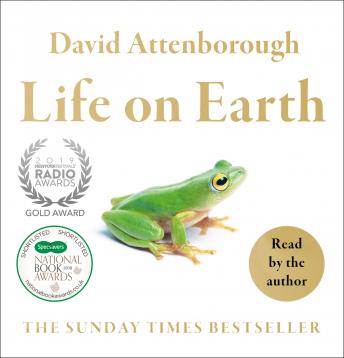 A new edition of David Attenborough's groundbreaking Life on Earth.


Shortlisted for Best Audiobook at the Specsavers National Book Awards 2018.


Shortlisted for Futurebook of the Year at the Futurebook Awards 2018.


The nation's greatest voice, David Attenborough, reads a brand-new edition of Life on Earth, now available as an audiobook for the first time.


David Attenborough's unforgettable meeting with gorillas became an iconic moment for millions of television viewers. Life on Earth, the series and accompanying book, fundamentally changed the way we view and interact with the natural world, setting a new benchmark of quality, influencing a generation of nature lovers. Told through an examination of animal and plant life, this is an astonishing celebration of the evolution of life on earth, with a cast of characters drawn from the whole range of organisms that have ever lived on this planet. Attenborough's perceptive, dynamic approach to the evolution of millions of species of living organisms takes the reader on an unforgettable journey of discovery from the very first spark of life to the blue and green wonder we know today.


Now, to celebrate the 40th anniversary of the book's first publication, David Attenborough has revisited Life on Earth, completely updating and adding to the original text, taking account of modern scientific discoveries from around the globe. This special anniversary edition provides a fitting tribute to an enduring wildlife classic, destined to enthral the generation who saw it when first published and bring it alive for a whole new generation.


This audiobook includes wildlife sounds from BAFTA Award winning sound recordist, Chris Watson, who has worked extensively with David Attenborough on his BBC projects. A soundscape appears at the beginning of each chapter to provide a fully immersive experience of the habitat and some of the species described. A full list of the tracks, as they appear in the audiobook, is available below.

This title is due for release on September 20, 2018
We'll send you an email as soon as it is available!