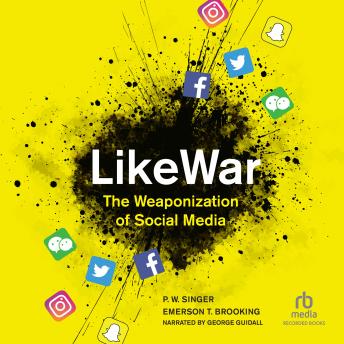 LikeWar: The Weaponization of Social Media

Social media has been weaponized, as state hackers and rogue terrorists have seized upon Twitter and Facebook to create chaos and destruction. This urgent report is required reading, from defense expert P.W. Singer and Council on Foreign Relations fellow Emerson Brooking. Social media are transforming war, crime, and diplomacy. Terrorists can broadcast attacks, 'Twitter wars' produce real-world casualties, and enemy movements can be tracked on social platforms. War, tech, and politics have blurred into a new battle space that's as close as our own phones. P. W. Singer and Emerson Brooking tackle the mind-bending questions that arise when war goes online. In this world, ISIS copies the Twitter tactics of Taylor Swift, an accountant in Georgia foils terrorists thousands of miles away, and OSINT (open source intelligence) outpaces other forms of espionage. What can be kept secret in a world of networks? Does social media expose the truth or bury it? And what role do ordinary people now play in international conflicts? Delving ever deeper into the darkest corners of the web, we meet the unexpected warriors of social media, such as the rapper turned jihadist PR czar and the Russian hipsters who wage unceasing infowars against the West. Finally, looking to the crucial years ahead, LikeWar outlines a radical new paradigm for understanding and defending against the unprecedented threats of our networked world.

Very disappointed with Like War - the author took every advantage to slam Trump and republicans and by itself that would have been fine but on the reverse side glossed over similar issues from the left. It's too bad because Trump's use of twitter is a new phenomenon and deserves discussion. But the author took what could have been a legitimate opportunity and turned in to an unnecessary bashing. All while stating that in the 90's there was a presidential impeachment that was brought about by simple internet innuendo ... So, Poppycock and Balderdash .. It's too bad because it's a litigate topic just not a legitimate author...IMHO..

Christopher C. Pretty much nails it. I gave it 2 stars because of topics covered. Really a shame the author is suffering from a terminal case of TDS and in fact suffers from a related mental illness: “Russia, Russia, Russia”.

Crucial social media ops theory, from ISIS to MAGA. Needing more like this and “Mindf*ck”.