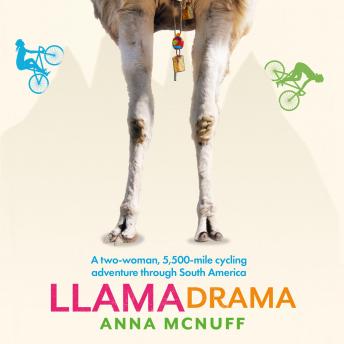 'Llama Drama is simply hilarious. If anyone wants something witty and moving at the same time. Also, something empowering, then this is the one for them. I literally inhaled it.' -  Claudia Winkleman, TV Presenter and Author

What listeners are saying about Llama Drama:

'Why take the shortest, most direct route through life, when you could choose the wiggliest, most mountainous one possible?

Armed with a limited grasp of Spanish and determined to meet as many llamas as possible, Anna and her friend Faye set off on a 6-month journey along the spine of the largest mountain range in the world - the Andes.

Beginning in the bustling city of La Paz, the duo pedal south - through dense jungle, across pristine white salt flats and past towering volcanoes, following the path of thundering glacial rivers to the snow-tipped peaks of Patagonia.

Sleeping wild in their tents most nights, they endure 50-mph crosswinds and catastrophic crashes, and go head to head with one very determined saddle sore called Sally. By the time they make it to the southernmost tip of the continent, they have cycled 5,500 miles and ascended over 100,000 metres through the mighty Andes - equivalent to 11 times the height of Everest.

Told from the seat of Anna's bicycle, Llama Drama is a witty and compelling account of life at its rawest and most rich. For anyone who has ever wanted to journey through the stunning natural landscapes of South America - this story is for you.

My husband and I listened to this as we commuted to and from work. As previous residents of La Paz, Bolivia, and fanatics about the Andes, we enjoyed every minute of these adventures. (We also love biking!) There were a few details we didn’t agree with, but after all, we lived there for 12 years! Warning to native Spanish speakers listening to the audiobook! McNuff admittedly gave up on Spanish, and her pronunciation at times grated on the ears.

Llama drama was entertaining, empowering and so very enjoyable from the start to the finish!

I loved this book and all the funny shenanigans they encountered. It’s an amazing thing to have a friendship like theirs and then be able to travel together for 6 months!! Highly recommend

This title is due for release on July 18, 2020
We'll send you an email as soon as it is available!