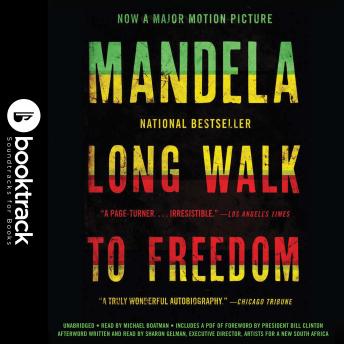 The autobiography of global human rights icon Nelson Mandela is 'riveting . . . both a brilliant description of a diabolical system and a testament to the power of the spirit to transcend it' (Washington Post).
Long Walk to Freedom: The Autobiography of Nelson Mandela: Booktrack Edition adds an immersive musical soundtrack to your audiobook listening experience! *
Nelson Mandela was one of the great moral and political leaders of his time: an international hero whose lifelong dedication to the fight against racial oppression in South Africa won him the Nobel Peace Prize and the presidency of his country. After his triumphant release in 1990 from more than a quarter-century of imprisonment, Mandela was at the center of the most compelling and inspiring political drama in the world. As president of the African National Congress and head of South Africa's antiapartheid movement, he was instrumental in moving the nation toward multiracial government and majority rule. He is still revered everywhere as a vital force in the fight for human rights and racial equality.

Long Walk to Freedom is his moving and exhilarating autobiography, destined to take its place among the finest memoirs of history's greatest figures. Here for the first time, Nelson Rolihlahla Mandela told the extraordinary story of his life -- an epic of struggle, setback, renewed hope, and ultimate triumph.
The book that inspired the major motion picture Mandela: Long Walk to Freedom.
*Booktrack is an immersive format that pairs traditional audiobook narration to complementary music. The tempo and rhythm of the score are in perfect harmony with the action and characters throughout the audiobook. Gently playing in the background, the music never overpowers or distracts from the narration, so listeners can enjoy every minute. When you purchase this Booktrack edition, you receive the exact narration as the traditional audiobook available, with the addition of music throughout.