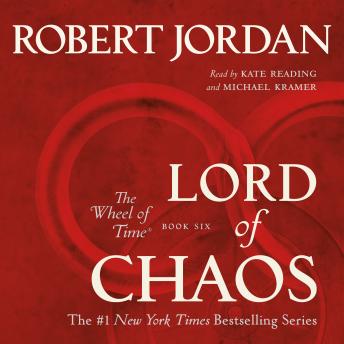 Lord of Chaos: Book Six of 'The Wheel of Time'

In Lord of Chaos, the sixth novel in Robert Jordan’s #1 New York Times bestselling epic fantasy series, The Wheel of Time®, Rand al’Thor, the Dragon Reborn, builds his army of Light even as sworn enemies--and supposed allies--move against him.

Now ruling Tear, Andor, and Caemlyn, among other nations, Rand is recruiting all men capable of channeling to be trained as his Asha'man soldiers. The warrior Aiel clans have pledged loyalty to Rand, acknowledging him as their chief of chiefs, even though the Shaido Aiel remain a threat.

Split into two factions, the Aes Sedai of the White Tower and their rebel counterparts both seek to ally themselves with the Dragon Reborn. Rand knows all too well the manipulative nature of the Aes Sedai, no matter which side of their internal war they stand upon. But even he cannot predict just how desperate, cruel, and treacherous they can be.

And in the shadows, the Forsaken and the Dark One are conjuring even more chaos...

the last 3 hours made the build up worth it

Love it! Much better than the one (no need to name it) that just went on and on without much happening... Although I love all the books so far but some more some less :) Good read???? And as always - just marvelous work by the amongst the top 5 narrators there is!

Of course I'm sold on this series, bring on book 7. I'm ready for Rand and Lews to have a real conversation lol.

Oh dear. This truly is terrible. After six books I give up, the sexism, orientalism, anti-semitism is just too much. Don’t waste your time.

One of the best chapters of entire series. Dumai's Wells. This book feels a little darker than others

Great book in a great series.

Maybe the greatest sci-fi series ever. And the end of the first half.

The last chapter in this book will give you goosebumps

Good book, but had an issue with the books recording where it skips frequently

The wheel of time has been a fantastic series. This book is no exception. I really enjoy the double narration. Cant wait to see how close they come in the TV series if it ever manages to get released.

I had a bit of trouble getting through the book just before this 1. It seemed to me to drag. This 1 pick me right backup again area looking forward to the next book! Next month.

Another enjoyable listen. Already on book 7!

Good book, good narrating, but they are cutting alot of the story out.

this book was not that great. you could listen to a whole chapter and nothing is forwarding the story. I feel like nothing happened in this book I hope it picks up next book

the skips and blur in narration is annoying as all get out! Such a great story ruined by the constant break in recording

Very confusing and boring for 90 percent of the book. There are many skips and missing parts of the book.

I love Robert Jordan. I love Michael Kramer. Wheel of Time is one of my favorites!!

Best book so far. I can't wait until the next.

love these books. love the narrators. you can actually understand everything they say and portray the characters.

6th book, just finished it, started directly with the 7th! Loving it!

Very exciting book! It's hard to stop listening. Good narrators as well. I like that it is two of them and not only one.

I enjoyed this book, though some parts were a little slow. It did pick up that made up for it. All in all a great book. Love the narrators. I'm glad they use the same ones.

Great book, I am a big fan of Robert Jordan. I think the narration gets better with each book. I especially enjoy the lady. There are some problems with the quality but that is not the fault of audiobooks. Great book overall.

I enjoy the narrators, but I'm getting so tired of their inconsistent pronunciation of people and places. I swear every book has a new way to say a name and it's not only confusing, but incredibly annoying.

It just keeps getting better, the books and the narrators.