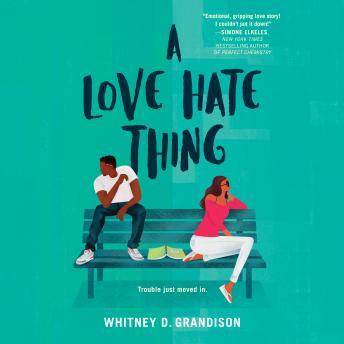 “If you love a good enemies-to-lovers trope, run—don’t walk—to the nearest bookstore or library near you.”—Buzzfeed

“A Love Hate Thing is an irresistible romance that you’ll gobble up whole.”—Popsugar

When they’re stuck under one roof, the house may not be big enough for their hate…or their love.

Despite having been shot, Tyson Trice has survived the mean streets of Lindenwood, so nothing can faze him—not even being tossed into the affluent coastal community of Pacific Hills.

Nandy Smith, the golden girl of Pacific Hills, is not pleased when she hears her parents are taking in a troubled teen boy. Nandy suddenly fears her summer plans, as well as her reputation, will go up in flames.

The wall between Trice and Nandy’s bedrooms feels as thin as the line between love and hate. Through time, Trice brings Nandy out of her shell, and Nandy attempts to melt the ice that’s taken over Trice’s heart. Only, with the ever-present pull back to the Lindenwood streets, it’ll be a wonder if Trice makes it through this summer at all.