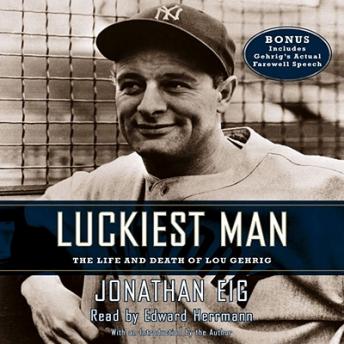 Luckiest Man: The Life and Death of Lou Gehrig

The definitive account of the life and tragic death of baseball legend Lou Gehrig.

Lou Gehrig was a baseball legend—the Iron Horse, the stoic New York Yankee who was the greatest first baseman in history, a man whose consecutive-games streak was ended by a horrible disease that now bears his name. But as this definitive new biography makes clear, Gehrig’s life was more complicated—and, perhaps, even more heroic—than anyone really knew.

Drawing on new interviews and more than two hundred pages of previously unpublished letters to and from Gehrig, Luckiest Man gives us an intimate portrait of the man who became an American hero: his life as a shy and awkward youth growing up in New York City, his unlikely friendship with Babe Ruth (a friendship that allegedly ended over rumors that Ruth had had an affair with Gehrig’s wife), and his stellar career with the Yankees, where his consecutive-games streak stood for more than half a century. What was not previously known, however, is that symptoms of Gehrig’s affliction began appearing in 1938, earlier than is commonly acknowledged. Later, aware that he was dying, Gehrig exhibited a perseverance that was truly inspiring; he lived the last two years of his short life with the same grace and dignity with which he gave his now-famous “luckiest man” speech.

Meticulously researched and elegantly written, Jonathan Eig’s Luckiest Man shows us one of the greatest baseball players of all time as we’ve never seen him before.

Excellent book! I knew Lou as a ball player now I know Henry Louis as a person and what a kind humble mild manner of man he was and the courage he showed through toughest periods of his life.

Excellent , What a remarkable ball player. struck down wih ALS . Never gave up and always looking for hope.

Excellent book. Great baseball story with a very human touch. I was ALMOST inclined to even like the Yankees for a bit. Having been a life-long Red Sox fan, this wasn't easy to accomplish. Highly recommend this book.

This read should be a mandatory pre-req for anyone who enters professional sports of any kind. It embodies the essence of everything a professional sportsman SHOULD be. My goodness . . .what has this world come to. When you compare then to now . . .it is frightening.

For any baseball fan, for any sports fan, for any fan of greatness, for any fan of life. This guy was on top of the world and came down with a deadly disease. Yet, he truly believed that he was lucky. The inter-mingling of Ruth and Gehrig makes this even better

This was an excellent book. Recently read another on about Lou Gehrig which was not nearly as complete.

A great baseball story. Enjoyable and touching. Gehrig was a model for what many players today need - consistent and humble, not self-centered and greedy.

I have always been a baseball fan, but knew little of the life of Lou Gehrig. The book not only gave great information on his carreer, but also showed who he was as a man. After listening to the book, his famous words mean so much more.

This is a wonderful book about a noble man. The baseball portions are concise and the story of his life and family are very moving. well worth listening to.

A great listen for any baseball fan, the story of Lou Gehrig makes you wonder how todays players could be so selfish. A great balance of the story of Gehrig's life in and out of baseball.

An excellent biography that transcends baseball. Eig captures the echoes of the 1920s and 1930s and delves into Gehrig the man, as well as Gehrig the ballplayer. There's a lot of information people typically don't know about how Gehrig handled his diagnosis of ALS in 1939.

I typically do not like Abbridged versions; however, the book did not lose anything with the abridgement. I truely enjoyed learning more about Lou Gehrig and his battles throughout his career.

Excellent book about the life of Lou Gehrig. Also a lot of interesting facts for the trivia buffs. Do expect to get all choked up through the last 2 CD's though.

A very interesting book about an amazing ballplayer and really an amazing person. In today's day and age of greedy, selfish and steroid taking athletes it was refreshing to hear about a true American sports hero who did it with natural strength, humility and class. Even when you know the outcome of the main character you still get a little choked up when he has to leave the game. It was nice to finally learn about what happened to Lou after he left baseball.

This title is due for release on April 6, 2005
We'll send you an email as soon as it is available!