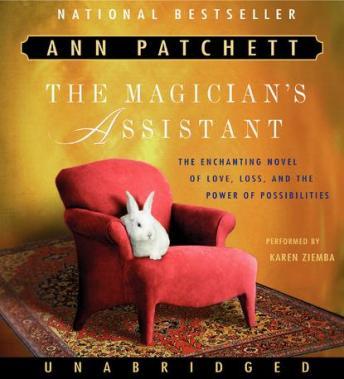 A secretive magician’s death becomes the catalyst for his partner’s journey of self-discovery in this enchanting book that is something of a magic trick in itself.

When Parsifal, a handsome and charming magician, dies suddenly, his widow Sabine—who was also his faithful assistant for twenty years—learns that the family he claimed to have lost in a tragic accident is very much alive and well. Sabine is left to unravel his secrets, and the adventure she embarks upon, from sunny Los Angeles to the bitter windswept plains of Nebraska, will work its own magic on her. Sabine's extraordinary tale captures the hearts of its readers just as Sabine is captured by her quest.

This book is an entertaining listen, but it felt incomplete, especially after listening to “State of Wonder” and “Commonwealth”, both of which were outstanding. I thought I had come to the end of a chapter, but it was the end of the book.

Felt like there were a lot of loose ends and incomplete story lines. Disappointed by the book.

I didn't care for this book. I kept listening and finished it because I liked a few of the characters, but the story was slow and if there was any point to it, I missed it.

This title is due for release on May 13, 2008
We'll send you an email as soon as it is available!