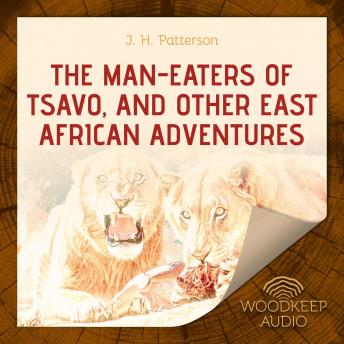 The Man-Eaters of Tsavo, and Other East African Adventures

During the construction of a railway line from Kenya to Uganda in 1898, the project was interrupted by two man-eating lions that targeted the workers. At the Tsavo River in Kenya where a bridge needed to be built. Over a period of about nine months, the lions killed scores of people at the site of the Tsavo River bridge. These lions were deliberately hunting humans, preferring them over any other prey. They seemed to have supernatural abilities in the way they evaded all attempts to stop them until Colonel JH Patterson, the chief engineer in charge of the project, finally managed to kill them. ‘The Man-Eaters of Tsavo’ tells the story of the events, in the first part of the book. Following the death of the lions, the book describes the bridge's completion despite additional challenges such as a flood, as well as many tales on local wildlife (including other lions) local tribes, and various hunting expeditions. The story of the man-eating lions has been adapted to film three times, the most recent being ‘The Ghost and the Darkness’ of 1996.

This title is due for release on December 15, 2020
We'll send you an email as soon as it is available!