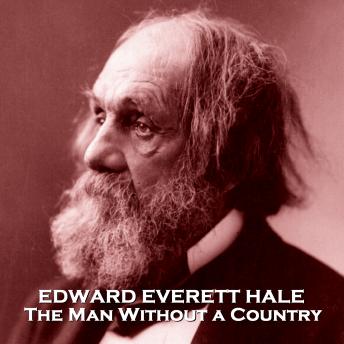 The Man Without a Country

Edward Everett Hale was born on April 3rd, 1822, in Boston, Massachusetts. He was a prodigy, gifted with extraordinary literary skills. At only 13 he graduated from Boston Latin School and enrolled at Harvard College. There, he settled in with the literary set, won two Bowdoin prizes and was elected Class Poet. He graduated in 1839. Hale now moved on to Harvard Divinity School and joined a group who had broken ranks with Calvinistic theology. These idealistic young people believed they were the vanguard for a moral revolution. They believed man was not totally depraved and that he could strive for higher and better things. Their purpose was to show him how. Hale was licensed to preach as a Unitarian minister in 1842. His literary career started quite late. It wasn't until 1859 that he was first published in the Atlantic with his short story "My Double and How He Undid Me." In 1863 the Atlantic published perhaps his best-known work "The Man Without a Country," written to strengthen support for the Union cause during the Civil War. His style of writing fiction as though it were fact helped readers to believe in the sometimes extravagant premise. He wrote across several literary forms including fiction, history and biography. Throughout his career Hale also published through various magazines using each outlet to advance several social reforms, including religious tolerance, the abolition of slavery and wider education. He was the author or editor of more than sixty books; fiction, travel, sermons, biography and history.Edward Everett Hale died in Roxbury, by then part of Boston on June 10th, 1909 at the age of 87. He was buried at Forest Hills Cemetery in Jamaica Plain, Suffolk County, Massachusetts.