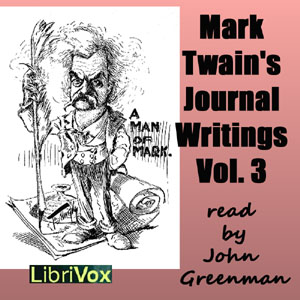 This third volume of Mark Twain's journal writings continues on eclectic and varied path established by the first two volumes. Included in this collection are works that appeared by themselves in magazines during Twain's lifetime, as well as essays taken by editors and Twain himself from Twain's larger works, and re-published in collections of his stories. This volume includes the following works: "Buying Gloves in Gibraltar", "The great revolution in Pitcairn", "A Gift from India" [including editor's notes about Twain's need to go on the lecture circuit, his authorship of Personal Recollections of Joan of Arc and other items], "From India to South Africa", "The Esquimau Maiden's Romance", "At the Appetitecure", "Edward Mills and George Benton: A Tale", "Does the Race of Man Love a Lord?" (Introduction by John Greenman)

After listening awhile I found I was not interested in his musings.

A classic. And we need to save them for generations to come.

I liked some of the journal entries, but not all. It was narrated very well.

This title is due for release on January 6, 2015
We'll send you an email as soon as it is available!