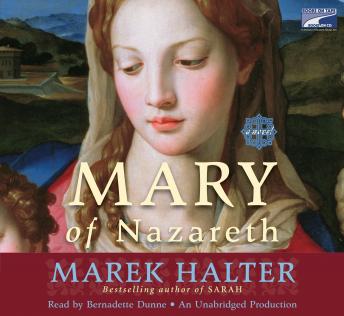 Mary of Nazareth: A Novel

The ancient world and its politics come to life through the eyes of a young Jewish woman, Mary of Nazareth

Miriam–also known as Mary–was born into a Palestine oppressed by Herod the Great; she is accustomed to living with uncertainty and unrest. But when her beloved father is wrongly imprisoned by the Romans, she takes action. She calls upon a well-known rebel by the name of Barabbas, and together they set out to save her father. A daring escape is accomplished and, against staggering odds, Miriam’s father is saved from crucifixion.

Barabbas, flush with the success of the rescue, is intent on leading a full-scale rebellion against Herod and the Romans. Along with Mary and her father, he speaks before Jewish leaders who have gathered from various communities. Miriam feels great frustration as the men endlessly debate morality, the wisdom of rebellion, and the nature of God’s will. Having almost lost her father, and knowing she will be ostracized, she nevertheless speaks out against the use of violence. And to her surprise, one man, Joseph, listens. He offers to take her to Magdala, where she will be allowed to study in the company of intelligent, well-read women. This rare opportunity sets into motion a series of events that will change Miriam’s life–and the history of the Jewish people–forever.

Based on extensive historical and biblical scholarship, Mary of Nazareth is a revealing, utterly captivating portrait of a woman whose story we only thought we knew.

This title is due for release on April 8, 2008
We'll send you an email as soon as it is available!