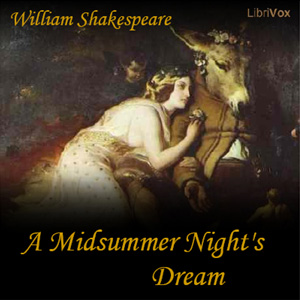 Magic, fairies, young lovers chasing each other through a forest, a man with a donkey's head, and impish Puck wreaking havoc right and left. What's going on here? It's A Midsummer Night's Dream, Shakespeare at his most fanciful. The play opens with Theseus, Duke of Athens, preparing for his wedding. Egeus complains to Theseus that his daughter Hermia refuses to marry Demetrius. When Hermia is given the choice between marriage to Demetrius or life as a nun, she and her true love Lysander flee into the forest. Demetrius follows them; and Helena, who loves Demetrius, follows him. Also in the forest are Oberon and Titania, king and queen of the fairies, at odds with one another. At Oberon's behest, Puck causes Demetrius to fall in love with Helena -- oops, he missed, that was Lysander instead. Mayhem ensues. In the meantime, a group of bumbling craftsmen rehearses a play. Puck gives one of them, Bottom, the head of an ass and makes Titania fall in love with him. Further hilarity results as Bottom sees nothing at all odd about this. Eventually everything is straightened out, Bottom and the rest "perform" their play, there is a triple wedding, and Puck assures us the whole thing has been a dream. Number of quotes you know: 5 (what fools these mortals be). Useful insults: 19. (Summary by Laurie Anne Walden)