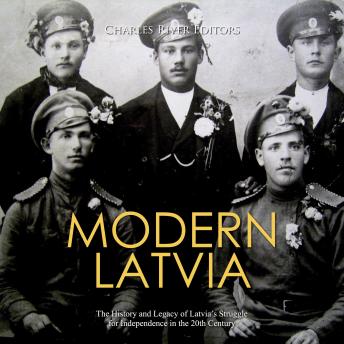 Modern Latvia: The History and Legacy of Latvia’s Struggle for Independence in the 20th Century

The three modern Baltic states - Latvia, Lithuania and Estonia - may occupy small tracts of lands bordering the Baltic Sea, but their respective histories are unique. Latvia, like its neighbours, was settled thousands of years ago, with a number of distinct Baltic peoples emerging. By around 900 CE, numerous Baltic and Scandinavian tribes dominated the region. Modern day Latvia is home to just under 2 million people and has been independent since the early 1990s. Now a member of both the European Union and NATO, the country is experiencing a period of prosperity and stability, at odds with much of its recent history. The country is dominated by the capital city Riga, a port on the Baltic Sea. The next largest cities, Daugavpils and Liepaja, are dwarfed by Riga with its population of 600,000. As well as its Baltic state neighbors to the north and south, contemporary Latvia is bordered by Belarus and crucially, its giant nemesis Russia to the east. Latvia’s history during the 20th century was defined by the determination of its people and its relationship with Russia, Germany, and then Western Europe more generally.

Latvia was home to about 150,000 people by the 12th century, which were mostly Baltic but with some Livonians (Baltic-Finns). It was at this time that the region came under the influence of German missionaries and traders. The trading city of Riga was founded in 1201 by Germans and later in the century was incorporated into the Hanseatic League, a trading network of ports that included Gdansk (in modern day Poland), Swedish capital Stockholm, and Hamburg, Bremen, Lübeck and Rostock in Germany itself. By the start of the 18th century, Latvia was seemingly entrenched into the Baltic political and trading sphere, as well as North Europe more generally. The rise of Russia would change this position.

Modern Latvia: The History and Legacy of Latvia’s Struggle for Independence in the 20th Century

This title is due for release on December 15, 2020
We'll send you an email as soon as it is available!