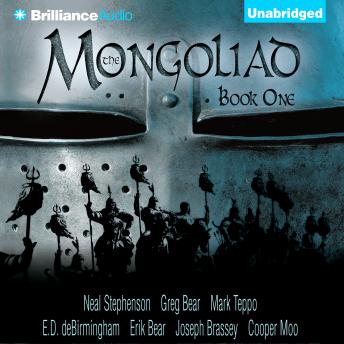 Fusing historical events with a gripping fictional narrative, this first book in the Mongoliad trilogy reveals a secret history of Europe in the thirteenth century.As the Mongols swept across Asia and were poised to invade Europe in 1241, a small band of warriors, inheritors of an ancient secret tradition, conceived a desperate plan to stop the attack. They must kill the Khan of Khans; if they fail, all of Christendom will be destroyed.In the late nineteenth century a mysterious group of English martial arts aficionados provided Sir Richard F. Burton, well-known expert on exotic languages and historical swordsmanship, a collection of long-lost manuscripts to translate—the lost chronicles of this desperate fight to save Europe. Burton’s translations were lost, until a team of amateur archaeologists discovered them in the ruins of a mansion in Trieste. From the translations and from the original source material, the epic tale of The Mongoliad was recreated.

Amazing book. Such a good story. The voice acting was amazing . I recommend 0

Epic story. Fantastic narration. Some of the best voice acting.

This title is due for release on April 24, 2012
We'll send you an email as soon as it is available!