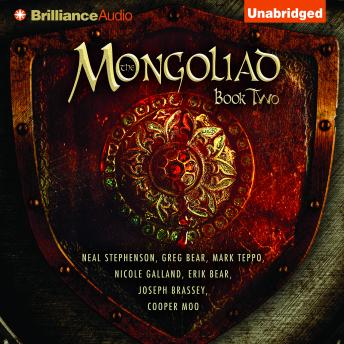 This riveting second installment in Stephenson and company’s epic tale focuses on the aftermath of the world-shattering Mongolian invasion of 1241 and the difficult paths undertaken by its most resilient survivors. The Shield Brethren, an order of warrior monks, search for a way to overthrow the horde, even as the invaders take its members hostage. Forced to fight in the Mongols’ Circus of Swords, Haakon must prove his mettle or lose his life in the ring. His bravery may impress the enemy, but freedom remains a distant dream. Father Rodrigo receives a prophecy from God and believes it’s his mission to deliver the message to Rome. Though a peaceful man, he resigns himself to take up arms in the name of his Lord. Joining his fight to save Christendom are the hunter Ferenc, orphan Ocyrhoe, healer Raphael, and alchemist Yasper, each searching for his place in history. Deftly blending fact and fantasy, The Mongoliad: Book Two captures the indomitable will to survive against immense odds.

This title is due for release on September 25, 2012
We'll send you an email as soon as it is available!