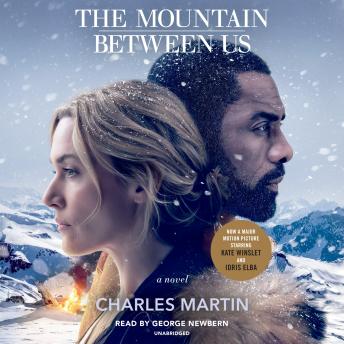 The Mountain Between Us: A Novel

From the author of Where the River Ends, comes this page-turning story of love and survival.

On a stormy winter night, two strangers wait for a flight at the Salt Lake City airport.  Ashley Knox is an attractive, successful writer, who is flying East for her much anticipated wedding.  Dr. Ben Payne has just wrapped up a medical conference and is also eager to get back East for a slate of surgeries he has scheduled for the following day.   When the last outgoing flight is cancelled due to a broken de-icer and a forthcoming storm, Ben finds a charter plane that can take him around the storm and drop him in Denver to catch a connection.   And when the pilot says the single engine prop plane can fit one more, if barely, Ben offers the seat to Ashley knowing that she needs to get back just as urgently.   And then the unthinkable happens.  The pilot has a heart attack mid-flight and the plane crashes into the High Uintas Wilderness-- one of the largest stretches of harsh and remote land in the United States.

Ben, who has broken ribs and Ashley, who suffers a terrible leg fracture, along with the pilot's dog, are faced with an incredibly harrowing battle to survive.   Fortunately, Ben is a medical professional and avid climber (and in a lucky break, has his gear from a climb earlier in the week).  With little hope for rescue, he must nurse Ashley back to health and figure out how they are going to get off the mountain, where the temperature hovers in the teens.   Meanwhile, Ashley soon realizes that the very private Ben has some serious emotional wounds to heal as well.  He explains to Ashley that he is separated from his beloved wife, but in a long standing tradition, he faithfully records messages for her on his voice recorder reflecting on their love affair.  As Ashley eavesdrops on Ben's tender words to his estranged wife she comes to fear that when it comes to her own love story, she's just settling.  And what's more: she begins to realize that the man she is really attracted to, the man she may love, is Ben.

As the days on the mountains become weeks, their survival become increasingly perilous.  How will they make it out of the wilderness and if they do, how will this experience change them forever?

Both a tender and page-turning read, The Mountain Between Us will reaffirm your belief in the power of love to sustain us.

I love all of Charles Martin’s books. I now have listened to all of his books. I watched the movie first. The book was SO much better! As always a great story and keeps your attention from the first to the last word! I am so sad that I don’t have anymore of his books to listen to!

Loved this book!!! Great storyline and a touching, gripping book. Plus there is a movie.

I listen to this book and wish I would’ve read it!! Such a great story!! After I finished the book I instinently watched the movie. The movie ruined a great book and story

so much better than the movie!

Fabulous story but I found that the characters kept finding the supplies & materials that they needed quite easily & conveniently.

I tried this book to read something different. I enjoyed the characters and the combination of survival and romantic stories. However, I felt the narrator took away from the story. he has a good voice but read almost everything in the same tone and inflection. There was no distinctive change or pacing from the moments that were stressful and those supposed to be happiest.

Really enjoyed this book, it had a great ending !

I simply loved it! At first enjoying the idea of caring enough about a stranger to not abandon for your own survival. To have a strength and fire I side to survive and help others around you survive. Then to let yourself imagine that type of love is possible while listening to the recordings is fun! Good book.

I listened to this book on a long road trip, and it kept me into the story the entire drive. I kept waiting to hear what would happen next. Strong character development, and interesting story. I felt like I was stuck in the mountains with them, and remained on the edge of my seat.

So much better than the movie!

Very interesting !! I enjoyed it! Would recommend it for others!

I loved everything about this book! it makes me want to find more books similar. I really wished it would have never ended

Loved loved loved this book. The story was captivating and the narrator did it justice. So impressed with this read!!! Could not stop listening to it!!

Hands down one of the best books I have listened too! Great storyline and narration.

This is a great book. I could not stop listening once I started. Highly recommend before watching the movie!

This was my first time listening to this author, I was pleasantly surprised and I didn't want to put it down ....I enjoyed it, thoroughly highly recommend!

Excellent to listen to! Need to hear it again! I fell asleep because it was comfortable to listen to..

This was a fantastic book! I loved the suspense and the drive to survive. I am actually listening to it for the 3rd time. I was excited for the movie, but after seeing the trailer on YouTube, I can see that Hollywood is going to screw it up.....as usual. Save your money and reread the book!!

I loved it! An amazing love story. A story of how a relationship can be devastating and when you least expected it, love finds you through tragedy.

Great book. The good reviews are for good reason. It has a little bit of everything.

This was my first Audio Book and it was excellent. The narration was easy to follow and the story kept me interested the entire time. I loved it!

Kept me interested with an unexpected ending, I loved it.

Great story with an unexpected ending. Characters are relatable and likable. Made me wonder what I would do in a similar situation. Did not want the story to end.

Literally one of the best books ever. I immediately was into it. Even w/ the preamble. Very surprising ending. I didn't want the book to end. I wish it was a series of books. Beautiful story. Excellently written

The Mountain Between Us is an excellent, astounding and engaging book. Charles Martin creates two realistic characters within a traumatic accident who display exceptional courage and strength. As the author develops each character, the bond between Ashley and Ben slowly grows into a relationship enabling each to process past trauma and accept/forgive in order to find love, true love.

This title is due for release on June 1, 2010
We'll send you an email as soon as it is available!