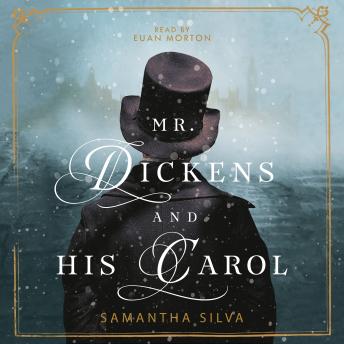 Mr. Dickens and His Carol: A Novel

'[Narrator Euan Morton's] British-accented narration is pure delight...This imaginative story is so charming that listeners will be convinced it is fact, not fiction. A heartwarming addition to the holiday audiobook collection.' — Booklist

Laced with humor, rich historical detail from Charles Dickens’ life, and clever winks to his work, Samantha Silva's Mr. Dickens and His Carol is an irresistible new take on a cherished classic.

Charles Dickens is not feeling the Christmas spirit. His newest book is an utter flop, the critics have turned against him, relatives near and far hound him for money. While his wife plans a lavish holiday party for their ever-expanding family and circle of friends, Dickens has visions of the poor house. But when his publishers try to blackmail him into writing a Christmas book to save them all from financial ruin, he refuses. And a serious bout of writer’s block sets in.

Frazzled and filled with self-doubt, Dickens seeks solace in his great palace of thinking, the city of London itself. On one of his long night walks, in a once-beloved square, he meets the mysterious Eleanor Lovejoy, who might be just the muse he needs. As Dickens’ deadlines close in, Eleanor propels him on a Scrooge-like journey that tests everything he believes about generosity, friendship, ambition, and love. The story he writes will change Christmas forever.

Full of holiday cheer and Victorian whimsy, Mr. Dickens and His Carol is the perfect audiobook to instill listeners with the Christmas spirit.

Praise for Mr. Dickens and His Carol:

'From his first words to his last, Euan Morton's narration is quintessentially Dickensian. This novel gives Morton the opportunity to voice all the personalities of the original CHRISTMAS CAROL — from revelers to Scrooge, ghosts, and Tiny Tim — and all are satisfying portrayals.' — AudioFile Magazine

“A charming, comic, and ultimately poignant story about the creation of the most famous Christmas tale ever written. It’s as foggy and haunted and redemptive as the original; it’s all heart, and I read it in a couple of ebullient, Christmassy gulps.” —Anthony Doerr, #1 New York Times bestselling author of All The Light We Cannot See

Mr. Dickens and His Carol: A Novel

This title is due for release on October 31, 2017
We'll send you an email as soon as it is available!