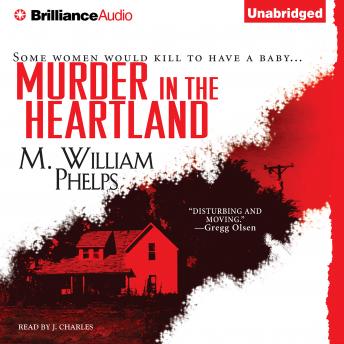 Murder in the Heartland

“The most disturbing and moving look at murder in rural America since In Cold Blood.” —Gregg OlsenOn a December night in 2004, a 911 operator in Nodaway County, Missouri, received a frantic call from a woman who’d found her pregnant 23-year-old daughter in a pool of blood on the living room floor. Most shocking of all, the dying woman’s unborn baby had been viciously ripped from her womb.“Get ready for some sleepless nights.” —Carlton StowersAcross the border in Melvern, Kansas, Lisa Montgomery showed off a beautiful newborn she proudly claimed as her own. While some shared her excitement, others harbored suspicions. Meanwhile televisions across the nation broadcast the first Amber Alert for an unborn child.“Phelps is a first-rate investigator.” —Dr. Michael M. BadenNewly updated with the latest surprising developments, Murder in the Heartland goes behind the scenes of two picture-perfect American towns forever changed by one horrifying act of violence. With exclusive access to key witnesses, family members, and potential victims who narrowly escaped a similar gruesome fate, M. William Phelps tells a classic American tale of unthinkable murder and the quest for justice.

This is a great book about a crime so heinous it will make you want to cry while making you angry while you are sitting at the edge of your seat...It still baffles me to this day how many evil people are out there with sweet faces. The author makes you feel the absolute terror this woman must have experienced before she was violated and mutilated. Then to feel The helplessness of the family as they await the fate of a newborn they have never even laid eyes on but loved so much. Narrator was great.

This title is due for release on January 29, 2009
We'll send you an email as soon as it is available!