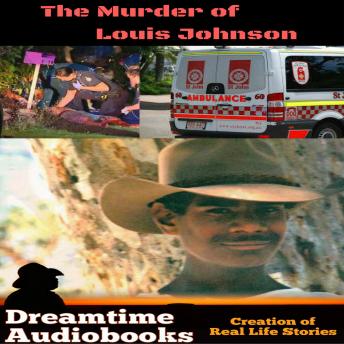 The Murder of Louis Johnson

We hear from Bill Johnson ( an English Man from the UK ) living in Australia how his 19 year old adoptive son ' Louis Johnson ' was murdered in the city of Perth by 5 youths from London.

Louis was walking home from his 19th Birthday party when he was attacked. After the gang of youth bashed Louis they went for a swim at the beach but then went back to kill Louis Johnson. They put his body over the curve and ran him over several times shattering his pelvis, with many internal injuries.

Later in the morning a cyclist on his morning ride found Louis on the road and called for an ambulance. Once the ambulance service got to the scene things spiraled more out of control with the ambulance officers calling Louis a petrol sniffer because he was an Indigenous Australian. The ambulance officers gave Louis no medical treatment and didn't take him to hospital, instead took him home. He later died in his mothers arms of internal injuries.

This all came out in the court case that Louis was bashed by a gang of youths from London and the Ambulance service was sued by the Johnson Family. The leader of the youth gang Mark Wilder got several years but the others were let off by the courts. Mark Wilder stated they bashed Louis because he was Black.

Bill Johnson wanted to tell the story about how he lost his son due to overt racism in Australia because of the colour of his skin. Bill makes the point that many people didn't stop to help Louis because of stereotyping that Louis may become violent or was drunk because he had Black skin. Bill makes it clear that the ambulance service didn't follow procedures by taking Louis to hospital.

Australian singer and song writer Archie Roach also highlights that Louis lost his life because people that passed Louis used stereotyping in their minds that a Black person would be dangerous if they tried to help and save Louis.

This title is due for release on June 26, 2017
We'll send you an email as soon as it is available!