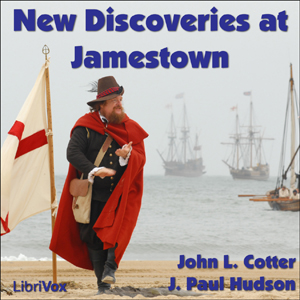 Chances are, you are reading this because you are aware that Jamestown, Virginia, celebrated its 400th birthday in 2007. It was the first "successful" English settlement in America. Although the colonists eventually moved upriver to be quit of the hard luck and difficult conditions on the small island, they left behind a trove of possessions - used, worn out, or forgotten.

Did you ever stop to consider just how many different items you have, need, or use, to live, work, and amuse yourself? Chances are that you would seriously underestimate! But once you put such a list together, another person could tell quite a story about the life you lead.

The puzzle of archeology is how to tell that story, just from the discovery of the traces you leave behind. Literally hundreds of thousands of artifacts have been recovered from this pioneering community during three major efforts (1903, the 1950's, and 1994-present) to reconstruct how Europeans of the early 17th century managed to transplant themselves to a wild and hostile land.

The authors, writing for the National Park Service in 1956, relate a fascinating tale of the colonists' resources, their possessions, and their manufactures. They relate documentary evidence from England, Virginia, and elsewhere, and then match it up with items found on the site.

Think about packing for a trip to a new world, where you will spend the rest of your life. There are no shops, no regular supply deliveries. You will build your own home. Food is strictly grown or caught on your own. The local folks (Indians) may be (and were, at some times!) hostile to your presence. You will depend on only a few dozen other people to help you with the things you don't know how to do, and they will depend on you. How do you prepare? What do you take?

This is that story.

This title is due for release on January 10, 2017
We'll send you an email as soon as it is available!