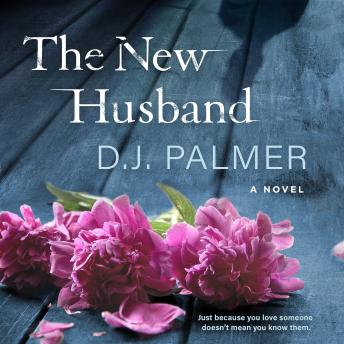 The New Husband: A Novel

The New Husband is a riveting thriller about the lies we tell ourselves from D. J. Palmer, the author of Saving Meghan.

What makes Simon Fitch so perfect?

-He knows all her favorite foods, music, and movies.
-Her son adores him. He was there when she needed him most.
-He anticipates her every need.
-He would never betray her like her first husband.

The perfect husband. He checks all the boxes.

The question is, why?

Nina Garrity learned the hard way that her missing husband, Glen, had been leading a double life with another woman. But with Glen gone—presumably drowned while fishing on his boat—she couldn't confront him about the affair or find closure to the life he blew apart.

Now, a year and a half later, Nina has found love again and hopes she can put her shattered world back together. Simon, a widower still grieving the death of his first wife, thinks he has found his dream girl in Nina, and his charm and affections help break through to a heart hardened by betrayal. Nina's teenage son, Connor, embraces Simon as the father he wishes his dad could have been, while her friends see a different side to him, and they aren't afraid to use the word obsession.

Nina works hard to bridge the divide that’s come between her daughter and Simon. She wants so badly to believe her life is finally getting back on track, but she’ll soon discover that the greatest danger to herself and her children are the lies people tell themselves.

I am in agreement with another posted review of this book. I tried to like it. I really did. It had a good premise, domestic thrillers are the thing now, and I like to listen to an exciting audiobook when I take my daily walk. But the more I listened and came to know the characters, the lower my rating went, and the behavior of some of them at the book’s end was just distasteful and unacceptable to me, which accounts for my 2-star rating. I finished it because I wanted to know who survived and who didn’t. if I had been reading a paper copy instead of listening to an audiobook I probably would have just flipped to the last chapter. I don’t know if this is a new author or not, but the book has the feel of inexperience. There is just way too much duplication – instead of a description or reference to set the scene, it goes on and on. It’s as if the author wants to include every possible phrase or scenario or bit of knowledge a character might have. The characters don’t ring true. I am willing to suspend disbelief – it’s fiction, after all – but this was beyond what I could ignore. On the one hand Nora knew pretty much everything and knew the lingo to go with it. How to do excellent online research, tail a suspect, avoid being scammed, she fell right back into the job she left many, many years before; you name it, she knew about it and could do it. But this is the same indecisive woman who fumbled around doing who knows what for a year and a half after Glenn disappeared and then ended up moving her family in with Simon, knowing as much about him as you would after a first date. Is he good, is he bad? Who knows? Well, daughter Maggie says she knows, but Nora won’t listen. Maggie is in junior high but her character feels more like a high schooler. A spoiled, whiny high schooler. It was eventually too much of a stretch to imagine a girl about 12 years old behaving as Maggie did. Son Connor is kind of just there. He likes Simon so provides the balance to Maggie’s loathing of him. And Nora can’t figure anything out, and when she starts to, she is inept, even with all her self-proclaimed expertise. Once the story got going the suspense ramped up and stayed at that level. There were several surprises that I did not anticipate. I was drawn into the story and wanted to find out how things ended. Had it not been for the poorly-developed, unrealistic characters I might have enjoyed it. However, the behavior of the characters at the end is entitled, selfish, and just wrong and totally spoiled it for me. Thanks to Macmillan Audio for providing a copy of The New Husband via Audiobooks.com for my honest review. I appreciate the opportunity to listen and regret I could not provide a more positive review. All opinions are my own.

The book had an interesting start and the storyline seemed to be promising. However as the book progressed I found it hard to like the main character and her cluelessness. I mean she says she learned the hard way about men telling lies but it takes her 1.5 years to try to find out something about the guy she's dating? It felt like she was just getting to know him not that they were engaged. It is not believable that a woman who was hurt wouldn't at least know a little bit about Simon especially the money thing. And if she was left in dire financial straights what have the three of them been living on for 1.5 years before they move in with Simon? How is this her first job? What was the conclusion drawn by the police when the husband went missing? There was a little bit of information provided then it was just glossed over. These were just a few of the plot holes in this story. And Connor was just a throwaway character. He had no real impact on the story and could have just not been part of the family. I think he had like four sentences uttered throughout the book--exaggeration but it wasn't too much more than four. I did like Maggie at least she was someone who thought things through. I liked how she found things out and her friendship with Ben. This character is the reason a three star was given instead of a two because the ending was even more torturous. It dragged on but didn't give you much information.

It was suspenseful in the beginning, but gave away a lot as the story progressed. The ending was tied up too nearly in a bow for my taste. But that being said, it’s better than any novel I could’ve written and I did listen to the end.

It really sucked me in and the narrator made it very believable.