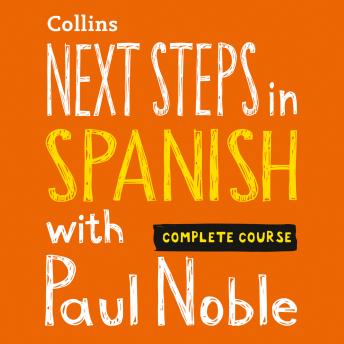 Next Steps in Spanish with Paul Noble for Intermediate Learners – Complete Course: Spanish Made Easy with Your 1 million-best-selling Personal Language Coach


Take your Spanish to the next level and further your fluency with Paul’s simple, relaxed approach and learn in a way that suits you – without having to memorise long lists of words you won’t use; scribbling notes as you listen; or feeling frustrated.


Instead, Paul will help you to you build on your existing Spanish knowledge and guide you through over 7 hours of essential tenses and grammar that you need to independently construct sentences and feel confident speaking Spanish in a variety of scenarios. Just listen, interact, and learn wherever you are. This course also contains a handy downloadable booklet to help you revise and reinforce your learning.

Next Steps is an intermediate course, for non-beginners, which follows on from the Learn Spanish with Paul Noble for Beginners – Complete Course.


To continue your language learning journey once you’ve completed this course, download Learn with Paul Noble Complete courses in a variety of languages: French, Italian, German, and Mandarin Chinese.

Next Steps in Spanish with Paul Noble for Intermediate Learners – Complete Course: Spanish Made Easy with Your 1 million-best-selling Personal Language Coach

This title is due for release on January 24, 2019
We'll send you an email as soon as it is available!