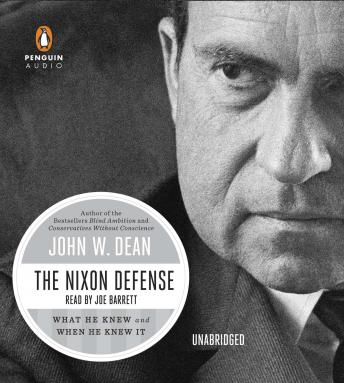 The Nixon Defense: What He Knew and When He Knew It

Based on Nixon’s overlooked recordings, New York Times bestselling author John W. Dean connects the dots between what we’ve come to believe about Watergate and what actually happened

Watergate forever changed American politics, and in light of the revelations about the NSA’s widespread surveillance program, the scandal has taken on new significance. Yet remarkably, four decades after Nixon was forced to resign, no one has told the full story of his involvement in Watergate.

In The Nixon Defense, former White House Counsel John W. Dean, one of the last major surviving figures of Watergate, draws on his own transcripts of almost a thousand conversations, a wealth of Nixon’s secretly recorded information, and more than 150,000 pages of documents in the National Archives and the Nixon Library to provide the definitive answer to the question: What did President
Nixon know and when did he know it?

Through narrative and contemporaneous dialogue, Dean connects dots that have never been connected, including revealing how and why the Watergate break-in occurred, what was on the mysterious 18 1/2 minute gap in Nixon’s recorded conversations, and more.

In what will stand as the most authoritative account of one of America’s worst political scandals, The Nixon Defense shows how the disastrous mistakes of Watergate could have been avoided and offers a cautionary tale for our own time.

Nixon Defense: What He Knew and When He Knew It

This title is due for release on July 29, 2014
We'll send you an email as soon as it is available!