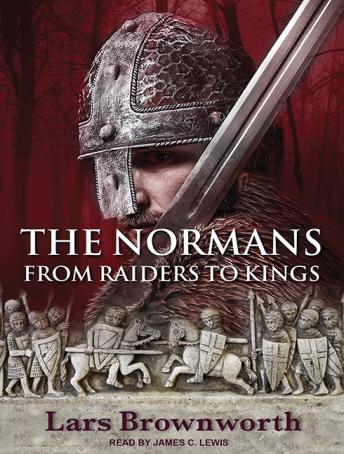 The Normans: From Raiders to Kings

There is much more to the Norman story than the Battle of Hastings. These descendants of the Vikings who settled in France, England, and Italy-but were not strictly French, English, or Italian-played a large role in creating the modern world. They were the success story of the Middle Ages: a footloose band of individual adventurers who transformed the face of medieval Europe. During the course of two centuries, they launched a series of extraordinary conquests, carving out kingdoms from the North Sea to the North African coast.

In The Normans, Lars Brownworth follows their story, from the first shock of a Viking raid on an Irish monastery to the exile of the last Norman Prince of Antioch. In the process, he brings to vivid life the Norman tapestry's rich cast of characters: figures like Rollo the Walker, William Iron-Arm, Tancred the Monkey King, and Robert Guiscard. The Normans presents a fascinating glimpse of a time when a group of restless adventurers had the world at their fingertips.

'An evocative journey through the colourful and dangerous world of early medieval Europe'-Jonathan Harris, author of Byzantium and the Crusades

A most comprehensive account of a complex period in European history. It is well handled by a very competent narrator who is faultless in his delivery. Best read in small digestible sections but, none the less, well worth the time and concentration required to really benefit from the wealth of knowledge therein.

I love history and "thought" i would enjoy this book. While it was very informative, it just was not my "cup of tea". Well researched,well written,I just did not enjoy.

The book was very informative and gave you a full perspective on the influence of the Normans in history. One drawback was that the transitions were a little abrupt. When going to a new chapter, not enough perspective was given when introducing new characters.