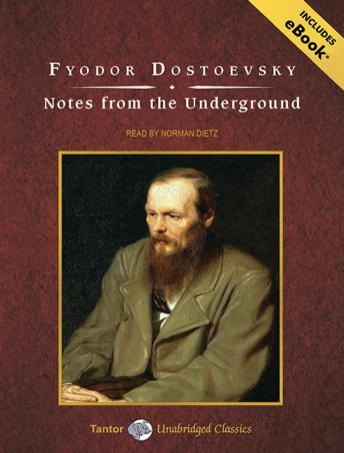 Notes from the Underground

A predecessor to such monumental works as Crime and Punishment and The Brothers Karamazov, Notes from the Underground represents a turning point in Fyodor Dostoevsky's writing toward the more political side. In this work, we follow the unnamed narrator of the story, who, disillusioned by the oppression and corruption of the society in which he lives, withdraws from that society into the underground. This 'Underground Man' is one of the first genuine antiheroes in European literature.

The first part of this unusual work is often treated as a philosophical text in its own right; the second part illustrates the theory of the first by means of its own fictional practice. A dark and politically charged novel, Notes from the Underground shows Dostoevsky at his best.

This version of Notes from the Underground is the translation by Constance Garnett.

I must admit this is not my favourite Dostoevsky. The character appears totally self indulgent. Probably not the best format for a wordy book. That aside as there are enough reviews to be read elsewhere, it was the narrator that irritated me. I found US pronunciation interferes with my listening but when the accent seems to border on comic Irish it becomes almost unlistenable. It would be a great help to no the style of spoken English when ordering a book.

This title is due for release on July 20, 2010
We'll send you an email as soon as it is available!