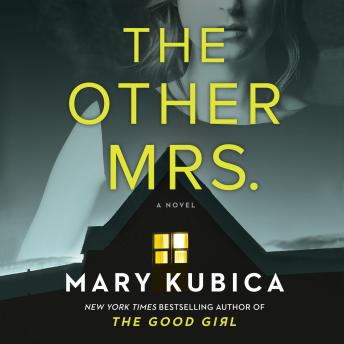 Sadie and Will Foust have only just moved their family from bustling Chicago to a coastal island in Maine when their neighbor Morgan Baines is found dead in her home. The murder rocks their tiny coastal island, but no one is more shaken than Sadie.

But it’s not just Morgan’s death that has Sadie on edge. And as the eyes of suspicion turn toward the new family in town, Sadie is drawn deeper into the mystery of what really happened that dark and deadly night. But Sadie must be careful, for the more she discovers about Mrs. Baines, the more she begins to realize just how much she has to lose if the truth ever comes to light.

Don't miss Mary Kubica's upcoming novel, Just the Nicest Couple, and look for her other pulse-pounding thrillers:
- The Good Girl
- Pretty Baby
- Don’t You Cry
- Every Last Lie
- When the Lights Go Out
- Local Woman Missing

Difficult to get through.

The book was very good! The narrator sounded like a computer and took a bit away from the experience.

This narrator sounds exactly like a computer monotone. I could not get past this. The storyline was trite and the characters were all annoying.

I liked the story, but it was hart to listen to the narrator. She sounded very robot like: similar to a car navigation system.

Great story if you enjoy a good thriller.

It was okay just slow moving. like to be grabbed at the beginning.

Dr. Sadie (mouse) and the other Mrs. named Camille. Her kids, niece, and the people in town have been telling her that they seen her or talked to her. Someone killed Sadie's niece mother, and a person in the neighborhood. She thinks it's her son Auto or Finds out Sadie and Camille are the same person. Sadie has DID, Dissociative Identity Disorder, with almost 4 different personalities. It all makes sense when she thinks of her own childhood when her stepmother used to abuse her, when her father left to go to work. It was her coping mechanism from her traumatic childhood. Her stepmother Charlotte used to put her in a dog cage, wouldn't feed her, killed her gerbil. Charlotte was a terror. Gotta be more careful who you leave your children with. This story, shows us that and the damage it does. Finds out her husband Will was the killer, but he knew they would look at Sadie because of her different personalities. He loved her different personalities and used it to his advantage. Whew, I would have never known until the end. #book9of2020 #bookworm #whatsnext

The book was good enough, but I almost stopped listening in the beginning because the narrator’s voice was stiff and didn’t seem fluent, very flat.

I can’t even finish this book. None of the characters are compelling. The narrative is hard to follow, and confusing. The narrators voice is insipid and irritating. I really wish I had not purchased this book.

It’s a hard slog getting through this book. The wording is repetitive and the narration is stiff and really boring

Love the twists and turns. Could not stop listening.