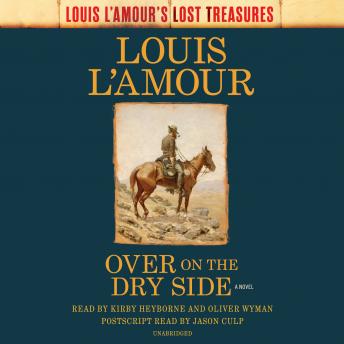 Over on the Dry Side (Louis L'Amour's Lost Treasures): A Novel

The abandoned cabin seemed like a good place to settle down . . . except for the dead man in the front yard. But Doby Kernohan and his father had traveled a long way seeking a new start, and they were in no position to be choosy. Unfortunately, the mysterious man’s violent end was an omen of darker events to come, for a cycle of violence that had begun long ago was about to reach an explosive conclusion. Caught in a tangle of murder, greed, and blood vengeance, the Kernohans have no choice but to get involved. And when a mysterious beauty from deep in the surrounding hills and a deadly stranger named Owen Chantry arrive, what had at first seemed like good fortune suddenly becomes a terrifying fight for life itself.

In Louis L’Amour’s Lost Treasures: Volumes 1, Beau L’Amour takes the reader on a guided tour through many of the finished and unfinished short stories, novels, and treatments that his father was never able to publish during his lifetime. L’Amour’s never-before-seen first novel, No Traveller Returns, faithfully completed for this program, is a voyage into danger and violence on the high seas. These exciting publications will be followed by Louis L’Amour’s Lost Treasures: Volume 2.

Over on the Dry Side (Louis L'Amour's Lost Treasures): A Novel